← "The Space Croppers" | Episodes of Lost in Space | "The Lost Civilization" →

John, Don, Will and the Robot go away on an expedition to find a fresh supply of water, leaving Smith and the women alone. As Smith and Penny go out to pick berries, a ragged man lurches up to them and begs for help. When Penny approaches him, he grabs her, and Smith flees in terror. The man demands to know if Penny has seen an alien, and when the child assures him that she has not, the man collapses from exhaustion.

Dr. Smith arrives back at the Jupiter 2 calling for help. He tells Maureen and Judy that Penny has been captured, and the women grab their laser weapons and go to rescue her. Smith directs them to the area where he had left Penny, but neither Penny nor the ragged man are there. Instead, they find two large, hairy creatures that growl and pursue them. They run back to the spaceship for cover.

They are happy to find that Penny has returned safely to the ship in their absence. She tells them she brought the injured man to the ship so he could rest and recover. She tells them his name is Ohan, and that he is a fugitive from justice. She goes on to explain that he is a space burglar being tracked down by the law, but that he is really a nice man who will not do them any harm. Smith wants Ohan to leave, but the women say that Ohan is welcome to rest until he feels better. When the thief wakes, he thanks them for their kindness and hospitality and leaves.

The next day, the two hairy creatures arrive at the Jupiter 2 with their master, Galaxy Law Enforcer Bolix. Bolix is looking for Ohan and demands they tell him where he has gone. Maureen tells Bolix quite honestly that Ohan was with them briefly, but has left. Bolix tells them that they should be arrested for helping a criminal and searches their spaceship. Bolix is searching for a very valuable item that Ohan stole. It turns out that Penny has it, but she promised Ohan she would keep it a secret. Dr. Smith persuades her not to tell Bolix about it. The item is supposed to lead one to a great treasure. Dr. Smith convinces Penny to let him hold the item for Ohan instead.

When Bolix has left and Penny is busy, Smith takes the item and holds it in his hand, demanding it lead him to the treasure. A disembodied voice warns him that the treasure he seeks is dangerous, and that it brings its owner nothing but sorrow, but Dr. Smith scoffs at this. The disembodied voice seems sad, and asks Smith “Will you settle for untold wealth above all things?” When the doctor says that he will indeed, the voice sighs and explains how he can find the treasure. Dr. Smith and Penny use the alien item to find a beautiful box which contains the great treasure. However, when they open the box, they find nothing but a large, metal ring. At first Smith is disappointed, but he is determined to find out how to use the ring to obtain wealth.

That night, as the doctor experiments with the ring in order to discover its secret, Ohan appears at the Robinson campsite. He has come for the item he left with Penny and asks where the child is. Smith tells Ohan Penny is sleeping and that he should come back tomorrow. Reluctantly, Ohan agrees. When Smith is alone again he discovers that the ring has a clasp which allows it to open. Smith unclasps the metal ring and places it around his neck. He then discovers that he has the power to turn any item to platinum just by touching it. In order to avoid returning the ring to Ohan, Smith arranges to betray Ohan to Bolix. When the time for Ohan to return to the camp arrives, he is arrested and taken away. Bolix thanks Smith for his help and leaves. Smith is very smug, knowing that now he can keep the ring to himself forever.

Dr. Smith demonstrates his new talent to the others by turning different items lying about into platinum. The women think it is certainly interesting, but not very useful. Soon Smith's power is beyond his control, as even his food and drink turn to platinum as he touches them. He cannot eat or drink, and the others are worried for him, realizing that if he may well die since there now seems no way to remove the ring from his neck. Unable even to enter the ship for fear of turning important equipment to platinum, Smith must remain outside, and eventually decides to leave for the wilderness to die alone.

Bolix later returns and accuses the women of betraying Ohan so they can have the treasure for themselves, unaware that the women were not involved. Maureen tries to explain that they don't have it, but Bolix doesn't believe them and threatens to arrest them. Penny runs off to find Dr. Smith so he can come back to prove to Bolix that her family is innocent. When she finds him, Smith sullenly refuses to help. Penny reaches for the doctor’s arm to try and persuade him, but Dr. Smith pushes her away. When he touches her, she is turned to platinum. Dr. Smith is heartbroken and returns to where Maureen and Judy are in order to confirm to Bolix that they are telling the truth. Bolix threatens them all and doesn't believe Smith's claim to be able to turn anything to platinum. Therefore Smith picks up a rock and turns it to platinum, after which Bolix is convinced. Bolix asks Smith if they can make a deal but Smith threatens to turn him and his alien creatures to platinum. After Bolix leaves, Smith goes back into the wilderness, weeping for Penny.

While sitting alone repenting of his greed, Smith hears the same disembodied voice. It asks him if he is happy with his wealth. Smith says he is not happy at all and asks only that Penny be turned back to her normal self, regardless of his own fate. The voice takes pity on Smith, and restores Penny. Dr. Smith finds that he can now remove the ring. Although somewhat reformed, he does pause to consider keeping a flower he had earlier turned to platinum as a souvenir. 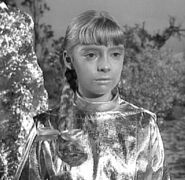 Add a photo to this gallery
Retrieved from "https://lostinspace.fandom.com/wiki/All_That_Glitters?oldid=28784"
Community content is available under CC-BY-SA unless otherwise noted.