Invaders from the Fifth Dimension

A mysterious blip on the Jupiter 2's radar is seen by Judy and Maureen, but when Don checks it, there is no sign of anything unusual. Meanwhile, Dr. Smith observes an alien ship touch down. When he attempts to flee, he is struck by a beam from the ship and taken aboard.

Inside the ship two aliens question Dr. Smith. They are in need of a humanoid brain to repair their ships guidance system. Since size is a factor, the aliens propose removing a portion of Smith's brain, but he quickly suggests a better alternative: Will Robinson's brain. To ensure his cooperation, the aliens place a metal ring around his neck and release him. Smith soon learns that the collar causes him excruciating pain when he delays in his task.

Later, Will and the Robot are talking when Smith arrives. He calls the Robot aside and orders him to remove the ring, but the task is impossible. When he cannot later find Will, Smith tries to lure Penny away from the camp, but Don's timely appearance on the scene prevents her leaving with Smith.

Will has gone off rock hunting, and when he does not return, his family searches for him. Dr. Smith comes across the boy first though, and cunningly manipulates him into accompanying him to the alien craft by telling him that his family is in danger. Will's parents arrive just as Will is taken prisoner.

The aliens are very pleased with Will Robinson's brain, and plan to take him with them on their journey as a living part of their computer. They are aware of the arrival of the Robinson party in the chariot, but have no fear of them, confident that they can destroy them at will. The Robinsons attempt to retrieve Will with the Robot, but he is soon disabled by the aliens. Allowed to speak with his parents, Will reassures them that they will be safe now. As the aliens prepare to leave with Will, they demand he calculate a complex mathematical problem required in computing their course, but Will is so consumed by his imminent separation from his family that he begins to cry and cannot focus on the task demanded. The aliens have no choice but to release Will; he is in fact totally useless to them.

Don: "So that's the monster?

Smith: "Now that doesn't look very monstrous does it?" 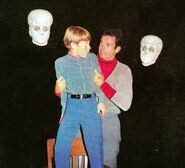 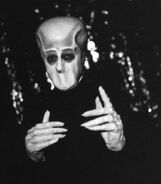 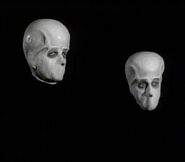 Add a photo to this gallery
Retrieved from "https://lostinspace.fandom.com/wiki/Invaders_from_the_Fifth_Dimension?oldid=26051"
Community content is available under CC-BY-SA unless otherwise noted.